warning: this one’s passionate, fact-based, but a bit long 🙁

Everyday Leadership definitionally asserts: everyone can lead. In our representative democracy, this is a tautology: citizens not kings are leaders. One of the complaints I hear a lot is that elected leaders are more like elected . . . followers, “with their finger in the air” trying to know which way the wind is blowing. Yet this is in many respects how it should be. We should be telling them where we want them to go.  If they aren’t going in that direction we should mobilize ourselves to be more persuasive and more active; we should change the direction in which the winds blow.

I haven’t been doing a good job of political leadership.

And seeing my wife Jennifer at her senate confirmation hearing this week to become Secretary of Energy inspired me.  So I offer four contrarian ideas to help us lead the country in a better direction:

As I shadowed Jen on Wednesday, I felt ashamed at how both partisan and cynical I have become – and how I have become part of the problem. I was inspired by three things I saw:

I don’t know whether I can transfer to you just a smidge of my appreciation for public servants. Are some abusers of the system? Of course! Are there spectacular ethical heroes?  Yes. Just like in the rest of our lives. But my point is there are people, great people in our city halls, state legislatures and congress, and we are all just a little bit responsible for what happened on January 6th, because we have all contributed to the trashing of American democracy and America’s elected democrats (small d).

2.  If we are serious about American democracy, we have to grow up to lead better. You and I are one of:

It is juvenile, if not infantile, to think a local representative, let alone a representative, senator or governor should see every issue the way you or I see it. Our increasingly segregated echo chambers reinforce our views and manipulate our emotions. They provoke our anxiety, our fear and over-stimulate our need for our tribe and our need to be right to protect us from “them.”  So, FOX and MSNBC say, and we amplify that (a) we are in danger, (b) we are right, (c) the other side are all “idiots, narcissists, socialists or fascists.” (Such name-calling is definitionally juvenile.) And (d) that it should somehow be easy for elected political leaders to solve our complex problems.

3.   Wean yourself from your favorite source of political junk food. I’m generally a progressive, but I’ve just about eliminated my intake of CNN and MSNBC. I’m tired of their playing to my outrage, hopelessness, and fear. They talk about division, as if it’s been caused by the politicians. But let me tell the truth about them: They LIVE OFF and stoke and feed political division with nearly every “breaking news” story. They want you pissed off, waiting for the next horror story about some looney tune legislator. They pour flames on the fires that divide us at one moment, and then they innocently ask Pelosi or McCarthy why they keep being inflammatory. Consider this:  If Pelosi and McCarthy, Schumer and McConnell made progress – let alone reached a deal on the Covid stimulus bill this week – how long do you think MSNBC and FOX would report on that?

4. Get some good news. I don’t mean happy news.  I mean quality news. See the Media Bias Chart below from a group called Ad Fortes Media if you want to know who you can trust. Left and right on the graph reflect left and right political slants. And top and bottom reflect the substantiation, from the most fact-based at the top to the lowest which are “selective, incomplete, unfair persuasion, or propaganda.”

I suspect that you are so steeped in believing your team or tribe that you may read this chart (as I confess I did), looking for how your team is better and theirs is worse. But it’s impossible to avoid the truth that comes from a first-look or a deeper dive: the more your sources are directionally “down” and “out” on the chart, the more you’re making yourself subject to “confirmation bias,” hearing only what reinforces what you already believe. And, the more YOU are LEADING America down a path of division. 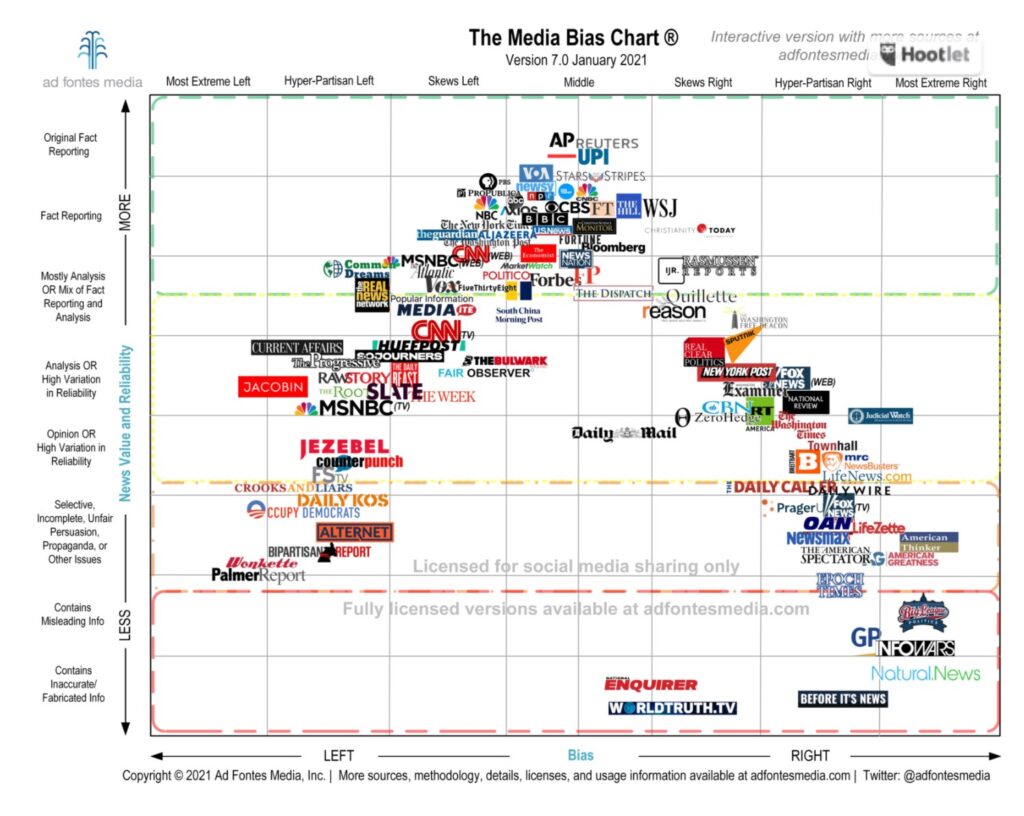 Get the true facts, engage in honest, curious dialogue and Lead America

with your best self.